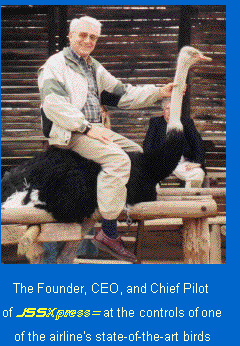 Between the U. S. Air Force and Trans World Airlines, I spent nearly forty years as a professional pilot. I never worked in management, but every pilot thinks that he could run the operation better than those in charge. So, a website based on an imaginary airline where I was the boss seemed to me like a great idea. In addition to all of the benefits listed on the home page for my "passengers", substantial benefits also accrued to me...no aircraft, no fuel costs, no employees, no payroll, no headaches.

Why JSSXpress? Everyone knows me as "Jim", but my full name is James Strode Swearingen III (hence the JSS3rd in my email address), and I frequently use my initials instead of a signature. I could wax poetic about how the name JSSXpress conjures up images of the romance of aviation but, to be honest, I just liked the sound of it, and the domain name jssxpress.com happened to be available.

The original James S. and Henry B. Swearingens (my great-great-grandfather and great-grandfather) were named after their maternal grandfathers, Captain James Strode and Major Henry Bedinger Jr, both of whom were officers in the Continental Army during the American Revolution. The Swearingen family has been in North America since 1657, but that's another story, told elsewhere in these pages.